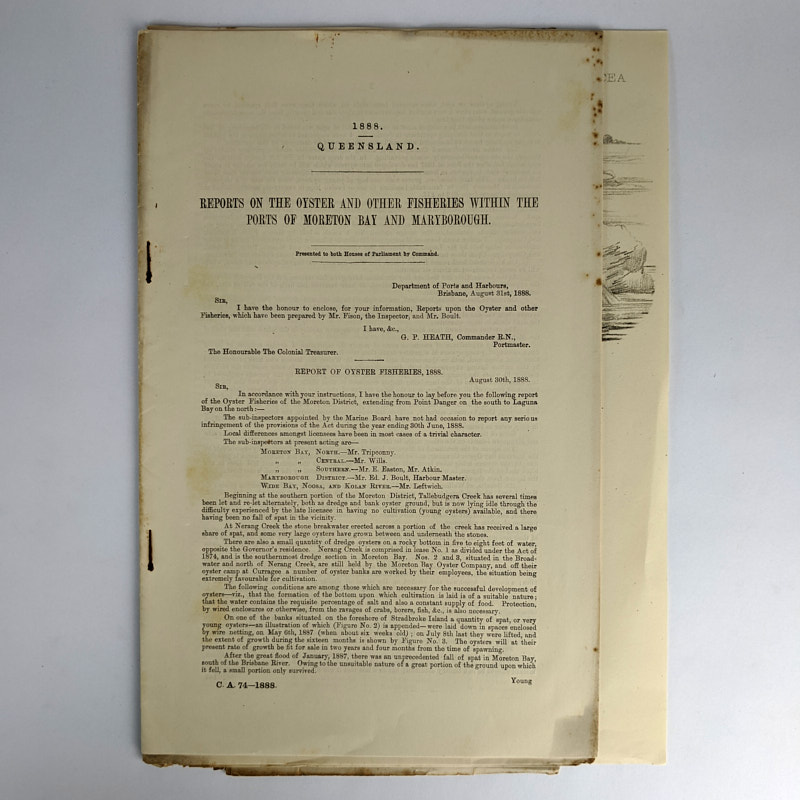 1888 Report on the Oyster Fisheries of Moreton Bay


: , .
First Edition.
34cm x 21.5cm. 15 pages, 3 plates (6 figures), 4 maps (3 folding). Side-stapled self-wrappers.
The most detailed of the reports to the Queensland Parliament on the oyster fisheries of Moreton Bay, stretching from Caloundra in the north to Point Danger in the south. The 1888 report came 2 years after The Oyster Act of 1886 which outlined transferrable leases for the bank and dredge collection and cultivation of oysters in Moreton Bay and attempted to make the industry more sustainable by introducing measures to stop the naked exploitation and then abandonment which earlier leases suffered from by less forward thinking license holders. The bay was divided into numerous dredge sections and portions of bank, and now having been in place since the Oyster Act of 1874 and with Fison settled into his role he largely reports on various developments related to the leases. The report is further extended with detailed reports on Queensland fisheries and oysters more broadly throughout the state including a more detailed report on oysters and fisheries in Maryborough, as well as with lengthy tables detailing leases and returns of oysters and fish. Includes 3 plates with 6 figures illustrating the development of oyster cultivation in Moreton Bay, a dugong, a Moreton Bay crustacea, and a clam from Barron River Cairns, as well as a map of the fishing area around Stradbroke, and 3 large fold out maps illustrating allotments in the central, northern and southern parts of the bay, and of the Maryborough region.
Minor foxing and wear. The plate with the crustacea and clam is loose and has a single misfold. The Maryborough region map has torn at the staples and is loose. Very Good Condition.