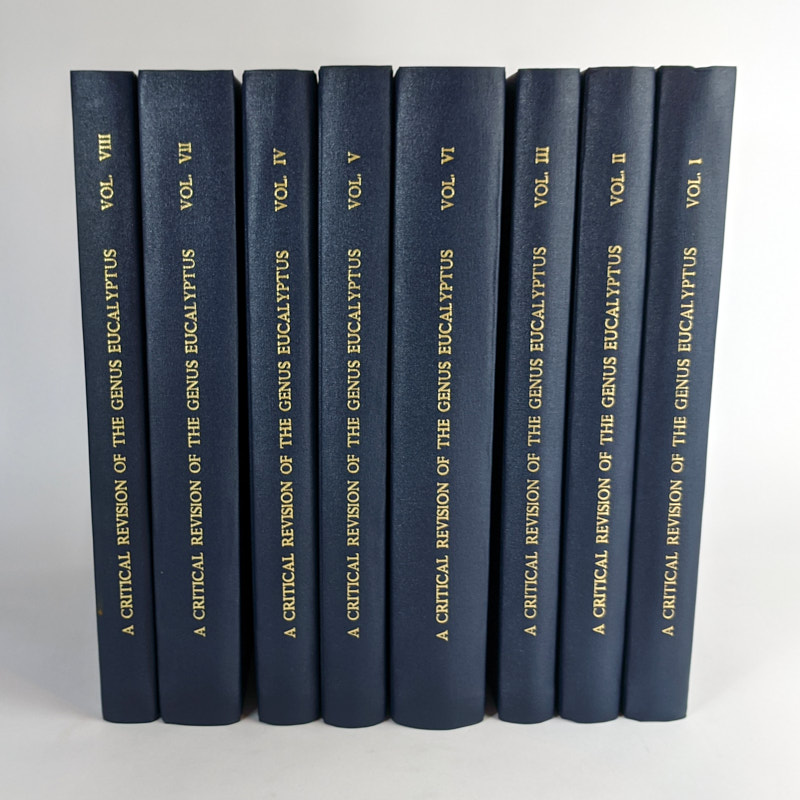 
: , .
First Edition.
30cm x 23cm. 8 volumes. Blue cloth, gilt lettering.
A complete set, being 75 parts in 8 volumes, containing over 3000 pages and 304 plates, 12 of which are in colour, and 4 of which are maps, of Joseph Henry Maidens masterpiece in the field of botanical research, and his major taxonomical work alongside his Forest Flora of New South Wales. The set is illustrated chiefly with lithographs by Margaret Flockton, together with several by Matilda Smith, a facsimile of LHeritier, and 4 maps, as well as a photographic illustration by L. C. Webster, and a photographic portrait of Maiden in one of the posthumous volumes therein also published an obituary by Richard Hind Cambage. The project, which took 28 years to be published, the final parts prepared by Maiden before his death in 1925 and published posthumously edited by Cambage and William Blakely, was an extension of the work started by Ferdinand von Mueller and George Bentham in Flora Australiensis and continued by Mueller in his Eucalyptographia, devising classifications based on the characteristics of the stamens, and remained an important reference for many years. Maidens study of eucalyptus was completed alongside his duties as Government Botanist and Director of the Botanic Gardens, which he commenced in 1896. A talented and enthusiastic botanist Maiden established the colonys first herbarium, the National Herbarium of New South Wales, together with a museum and library. Among his many studies and achievements he was also responsible for the construction of Sydneys first playground and worked tirelessly to develop the educational value of the Botanical Gardens for all Australians.
Rebound in blue cloth without the original wrappers, the edges trimmed, occasionally cropped into part of the plate captions. Bindings are in Fine Condition, and overall the text blocks are in Near Fine to Very Good Condition. Stamps of Lysaghts Newcastle Works, Port Kembla Branch, an Australian steel company throughout, and a few stamps of the Linnean Society of New South Wales in Volume 7. The colophon of Volume 5 Part 4 has torn and been repaired with tape. Occasional minor foxing, mostly to some plate versos of Volumes 1, 2, and 7, and very occasionally minor to moderate minor, mostly to the later parts of Volume 1 and to the rear of Volume 8 Part 3. Minor tanning to pages. A very occasional minor soil. Very Good Condition.