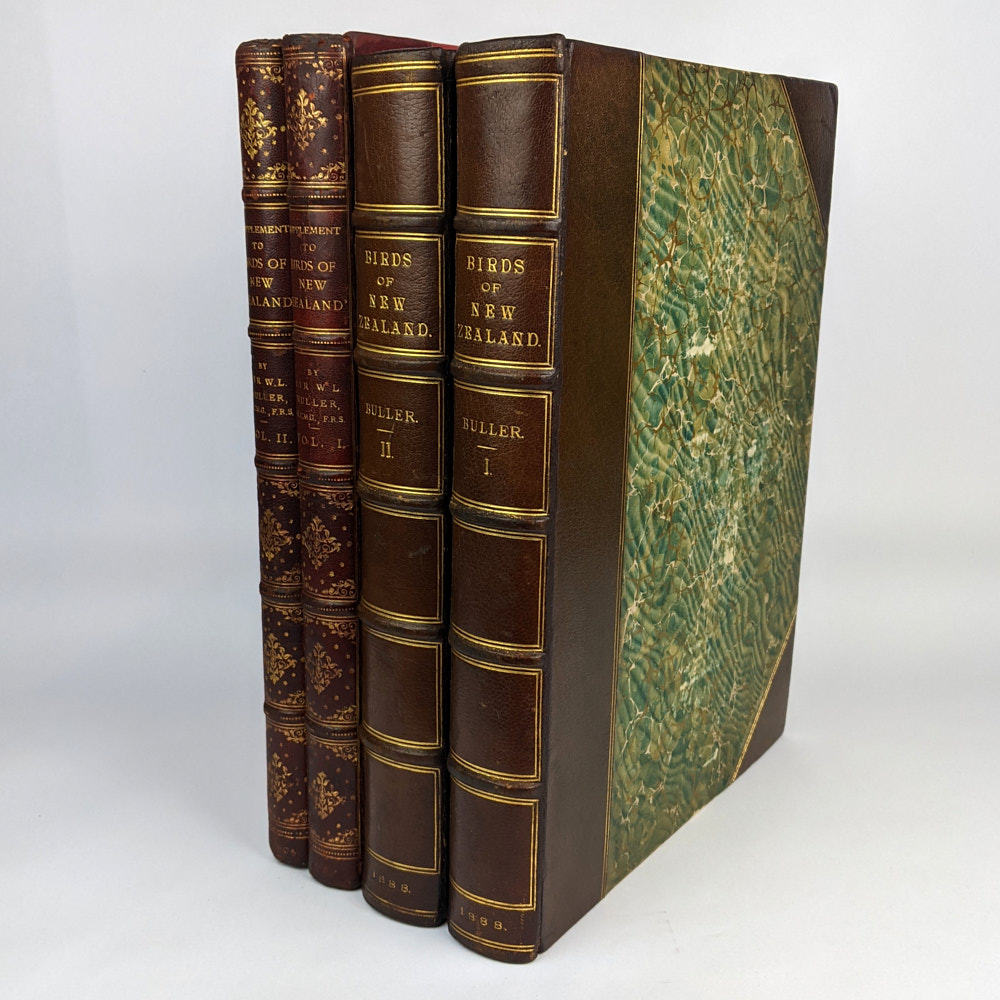 
: , .
Second Edition.
38cm x 29cm. lxxxiv, 250, [6], xv, 359 pages, 62 plates (60 coloured), frontispiece portrait, black and white illustrations in the text, 4 volumes. Contemporary half leather.
A full set of Buller’s Birds of New Zealand, comprising thirteen parts in two volumes of the much enlarged Second Edition published in 1887 and 1888, together with the two supplementary volumes published in 1905 and 1906, shortly before Buller’s death. A classic of ornithology and New Zealand natural history, with 48 chromolithographs from colour drawings by prized Dutch bird illustrator John Gerrard Keulemans, 2 uncoloured lithographs after drawings by Joseph Smit, and the supplement containing a further 12 plates from drawings again by Keulemans, these handcoloured by Dora Louise, Daisy Madeline, and Sylvia Rosamund Bowdler-Sharpe (three daughters of English ornithologist Richard Bowdler Sharpe), and also by Mr. G. Edwards. Each volume with further black and white illustrations throughout the text. The Second Edition with a print run of 1,000 copies (though more than 200 were lost in shipwrecks) and the supplements with print runs of 500 copies together present 62 plates which are some of the finest examples of the form. “The text gives a very complete synonymy for each species, describes both sexes and every condition of plumage, and tells the life-history of each bird from personal observations made by the author during a period of twenty years. After the lapse of seventeen years Buller issued a ‘Supplement to the birds of New Zealand’, in which he embodied the material relating to the subject that had been collected in the meantime, and in which he deals with all the known species of the birds of New Zealand.” ANKER 85, ZIMMER p. 115, BAGNALL 757, 758, B1714.
This set with the original wrappers bound in at the rear. Joints thinning and with some cracking at the crown and tail of the supplements, but still intact. Foxing to the preliminaries of volumes 1 and 2, the rest of the interiors mostly clean with only very minor foxing or soiling in places, a minor soil to plate IX in volume 1. A few plates with minor offsetting to the tissue guards and the tissue guard to plate XXX with a small chip to the top edge. Professional page repair to the tail margin of 3 leaves in Supplement 1, being preliminary pages v/vi, xxiii/xxiv, xxv/xxvi. Very Good Condition.