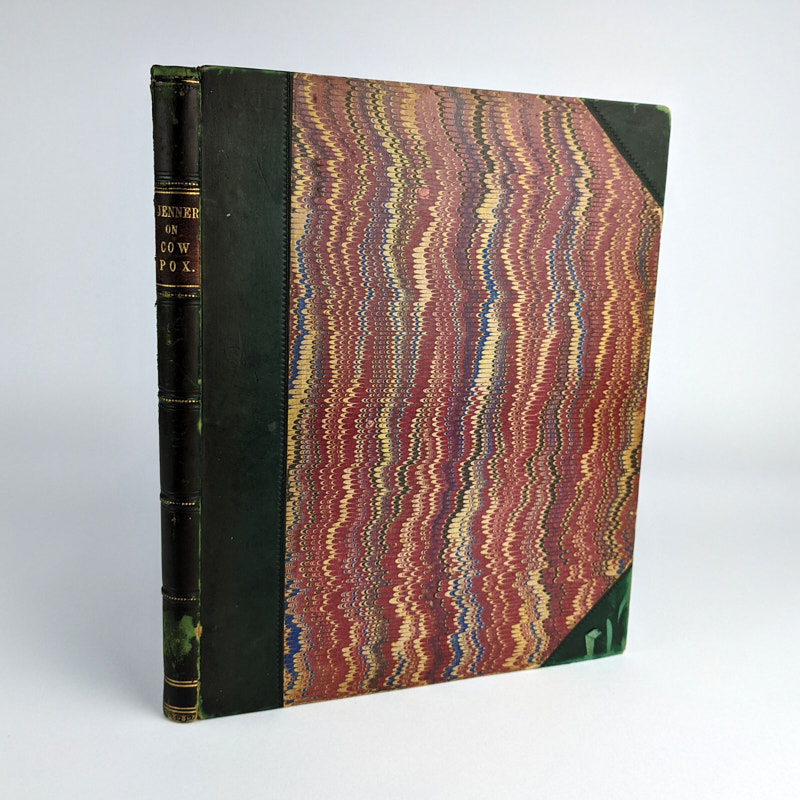 An Inquiry into the Causes and Effects of the Variolae Vaccinae, a Disease Discovered in some of the Western Countries of England, Particularly Gloucestershire, and Known by the Name of The Cow Pox


: , .
Australian Edition.
27cm x 22cm. [ii], v, 184 pages, 4 colour plates. Half leather, marbled papered boards, gilt lettering.
The 1884 Australian reprint of one of the seminal works of medicine, Edward Jenner’s pioneering work on the creation of the smallpox vaccine, the world’s first vaccine. Published in the wake of Sydney’s 1881 smallpox outbreak as part of a renewed push in what was a long and unsuccessful campaign by New South Wales medical practitioners for mandatory vaccination, when by 1860, Queensland and New South Wales were the only Australian colonies not to have enacted such legislation. Reprinted from Australian physician George Bennett’s copy of the Second Edition published by Sampson Low in 1800 and containing the second and third parts, while stated in the preface (likely penned by John Creed) to be “a perfect fac simile”, differs from the original edition in that it is “printed in a later and slightly larger type, in which the old “s” form does not appear. The half-title is omitted, and the title page, though a fairly close reproduction of the original, bears in small type a job number of the local printer. On the reverse of the title, blank in the original, appears “Reprinted by Authority: Thomas Richards, Government Printer, Sydney, 1884. A preface occupying a single page is inserted, and this, with the differences in type, alter the pagination. As in the original, a second part “A Continuation of Facts and Observations Relative to the Variolae Vaccinae”, with its own half-title and title pages, is included. The four coloured engravings are well reproduced in lithograph, the artist’s and engraver’s names being omitted. The text has been corrected from the errata page of the original, which is not included.” (The Sydney Reprint of Jenner’s Inquiry, Edward Ford, FERGUSON 10930, FORD 1052)
Some rubbing to leather and board edges. Previous owner’s label to front free endpaper and name in pencil to front flyleaf. Some foxing, mostly to edges and first and last pages. Very Good Condition.