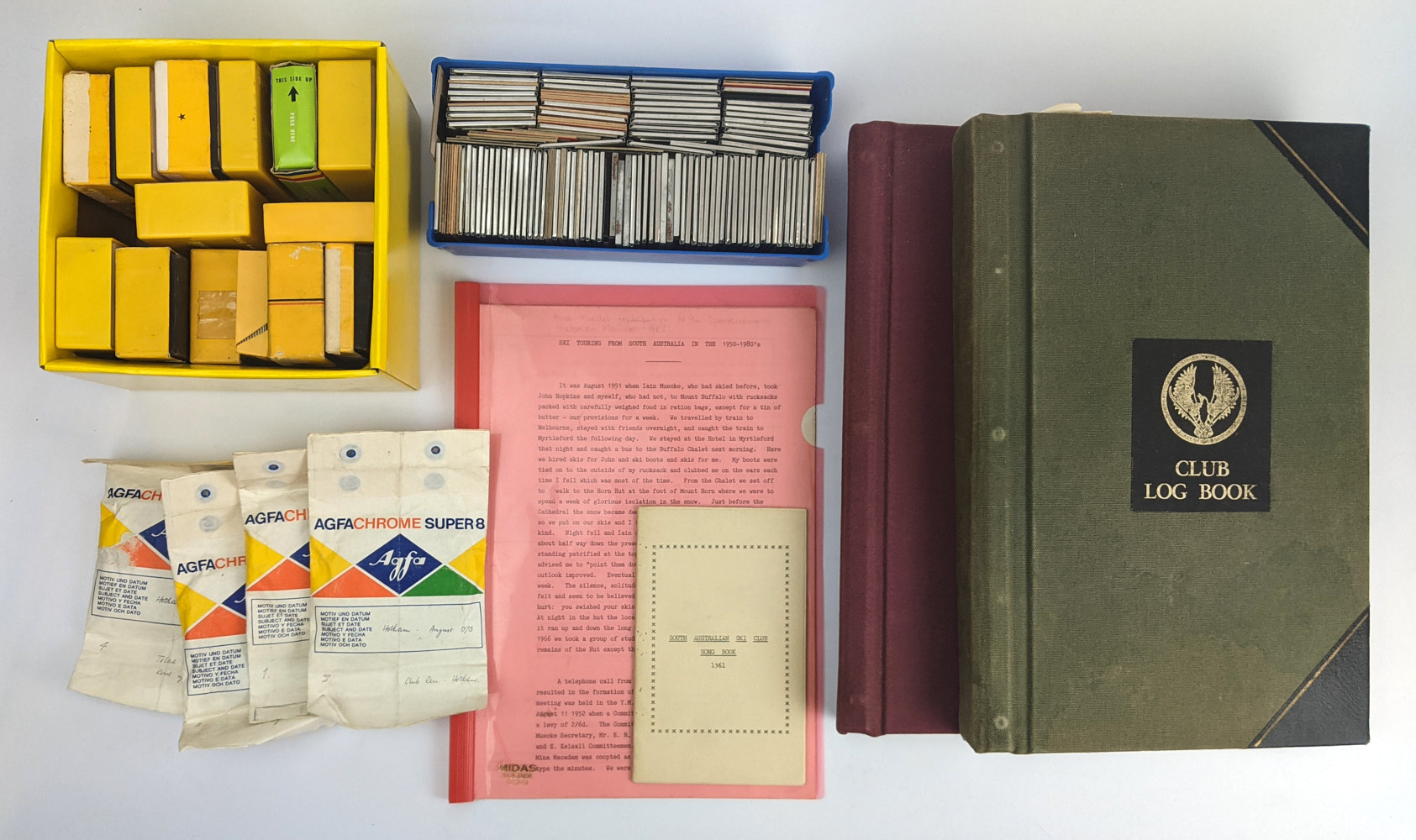 
: , .
First Edition.
35cm x 23cm. 2 cloth bound log books, 40 page song book, 15 leaves of related correspondence, 443 slides, 4 Super8 films.
Two binders containing a detailed archive of the South Australian Ski Club, from its founding to the year 1979, together with slides and films of Club trips and activities. The logbooks are primarily a detailed record and description of the yearly Club Trips, mostly to the Victorian alpine region, but in the later years also to New South Wales, as well as to New Zealand. The logbooks go further to include general Club history, administration, and activities beyond the alpine sojourns, complete with various ephemera and member contributions bound in. The logbooks commence with the March 1952 edition of Victorian Ski Club Journal ‘Ski Horizon’, in which Club founder Don Woods appeals to “skiers exiled in South Australia” to join him in setting up the new club, and by August 1952 with a founding meeting of 12 members, the club is formed. The logbooks continue in yearly sections each containing an annual report by the president and various records of the club trips for that year, including member lists, food lists, chore rosters, boozemaster reports, snow reports, letters to bus companies, race fixtures and results, art work, photographs, poems, and more, including various pieces of ephemera and member contributions, both type and manuscript, as well as other club activities and related ephemera undertaken at low altitude, including club barbecues, annual dinners, and various goingson, for example, a cutting about a court case brought against a crop duster for dumping 2 tons of Lux flakes on Mt. Lofty and creating traffic chaos as locals competed to get a look. The logbooks are accompanied by 443 photographic slides, 4 Super8 film reels, the 1961 Club Song Book, and a 6 page paper for a proposed publication of South Australian women in sport by club member Mina Muecke titled ‘Ski Touring from South Australia in the 1950-1980’s’, which tells of ski trips to the Victorian and New South Wales alpine regions as well as the Club’s 1971 trip to New Zealand, with related correspondence, a list of Club Race Winners 1954-1986, and manuscript lyrics for a song, ‘Club Ski-ing, or We’ll All Go Together When We Go’. The slides are housed in 14 boxes and a case, most of which are unlabelled but largely depict various snow scenes. Some of the boxes labelled with various trips, Buller, Spargo’s Hut, Coronet Peak. The 4 Super8 films are labelled Hotham August 1978 and include the Club Race for that year (the films have not been examined). From the estate of founding member and office holder Iain Muecke. A unique record of Australian middle-class leisure in the second half of the twentieth century.
. Very Good Condition.