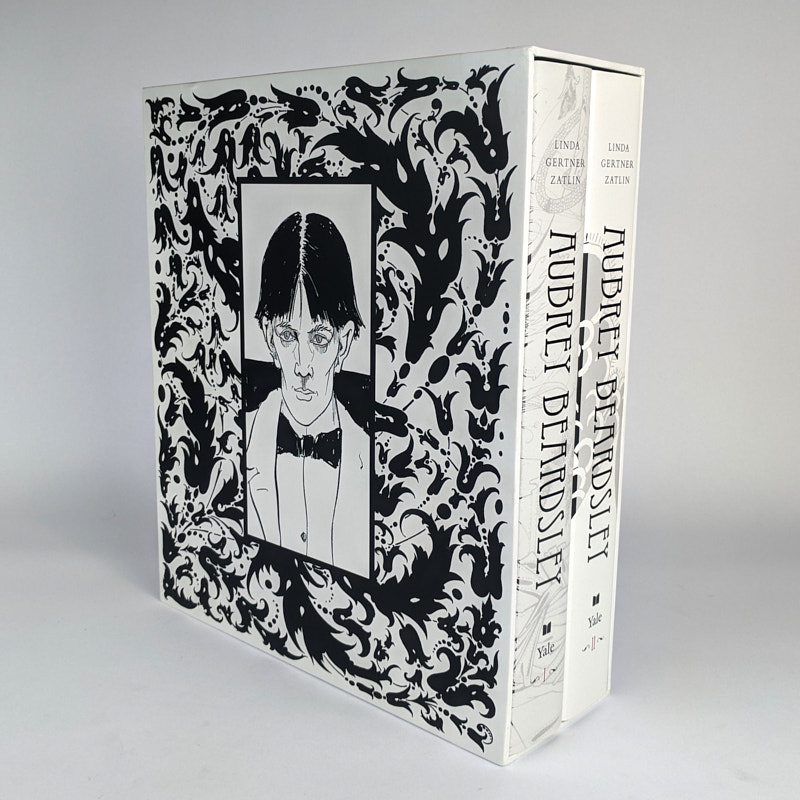 
: , .
.
31cm x 26cm. xxxii, 520, xii, 548 pages, 2 volumes, 75 colour and 1,145 black and white illustrations. Black cloth, silver lettering and decoration, illustrated jackets, illustrated slipcase.
“A comprehensive presentation of the provocative, modernist graphic works of Britains creator of Art Nouveau This is the first book to bring together the recorded works of the English artist Aubrey Beardsley. Despite his early death from tuberculosis in 1898, at the age of 25, these amount to nearly 1100 completed works of art (plus many related sketches) as well as more than 100 sketches in his letters and the books he owned, and this book includes over 50 that have never previously been published. In his brief career Beardsley made a defining contribution to Art Nouveau in Britain and abroad. He also influenced the early history of modern art, attracting the attention of the young Picasso, for example. His distinctive and innovatory graphic style, combined with highly provocative, often sexual subject matter, outraged critics and led to a period of intense notoriety. Beardsley’s drawings span the grotesque, the delicately beautiful, the subtly erotic, and the frankly bawdy, and challenged the moral norms of Victorian society. They enthralled artists and art lovers the world over and continue to enthral today. Linda Gertner Zatlin’s text presents Beardsley’s drawings with a full record of their making, provenance, exhibition history and references in the art historical literature. This material record is accompanied by often extensive discussions of their themes, motifs and symbolism, as well as their critical reception. Unprecedented in its scope and thoroughness, this study presents Beardsley’s work and explores its meanings more comprehensively than any previous work on him; it is likely to remain definitive. This superbly illustrated two volume catalogue, beautifully presented as a boxed set, is both an essential reference for specialists and an accessible and enchanting delight for Beardsley enthusiasts.” (publisher’s blurb)
Books and jackets are in Fine Condition. Very minor bumping to slipcase edges. Near Fine Condition.