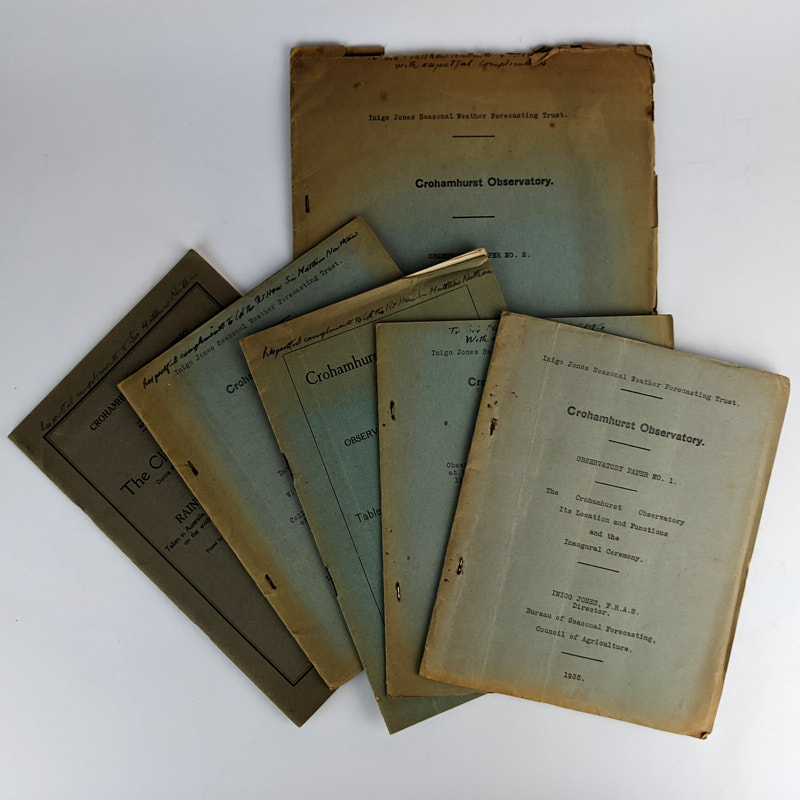 
: , .
First Edition. Inscribed by Author
Various sizes. 6 volumes. Lettered side and saddle-stapled booklets.
The first six Observatory Papers produced by meteorologist and long term weather forecaster Inigo Jones (1872-1954) at his Crohamhurst Observatory on his family farm near Peachester,on the Sunshine Coast hinterland, Queensland. At age 16 Jones was recruited by the head of the Brisbane Meteorological Office, Clement Lindley Wragge, to act as his assistant. Based on Wragge’s interest in the investigations of Edouard Bruckner into sunspots and changing sea levels, Jones began developing long term forecasting hypotheses. Jones returned to the family farm for many years working the land with his father, and continued his meteorological studies. Off the back of a successful prediction to the end of a dry spell in 1923 Jones received funding from government and industry, was appointed director of the Bureau of Seasonal Forecasting at the Council of Agriculture, and in 1928 established the Inigo Jones Seasonal Weather Forecasting Trust. With funding from the trust and Colonial Sugar Refining Co. (CSR), the Crohamhurst Observatory was built in 1935. Paper 1: The Crohamhurst Observatory: Its Location and Functions, and the Inaugural Ceremony. Paper 2: The Elements of Crohamhurst, 1892-1935. Paper 3: Observations of Deep Earth Temperatures at The Botanic Gardens Brisbane, 1928-1935 and at Crohamhurst Observatory 1935 from 1st June, also The Sea Surface Temperatures at The Pile Lighthouse, Moreton Bay and The Solar Constant of Radiation at Montezuma, Chili and at Table Mountain. Paper 4: Tables of Rainfalls in Queensland for the Years 1933, 1934, 1935. Paper 5: Data from Australian Observations for the Period 1770-1853 with all available Rainfall Figures, also Collected as Evidence of the Repetition of the Weather in Cycles, under the Hypothesis now being investigated at the Crohamhurst Observatory. Paper 6: The Climate of Australia, During the Hypothetical Jovian Sunspot Cycles, 1853-1876, together with the Rainfall Observations Taken in Australia since 1882, by Years to 1876, with some comments on the evidence of Cyclical Reproduction in that period. Each paper is inscribed by Inigo Jones to former Queensland Governor Sir Matthew Nathan, though the top edge of the wrappers front panel containing much of the inscription on paper 2 has chipped away.
Set is in Good to Very Good Condition. Most wrappers tanned, some with small chips and tears to edges, most prominently to paper 2. Wrappers front panel of paper 1 creased. Interiors clean. Very Good Condition.