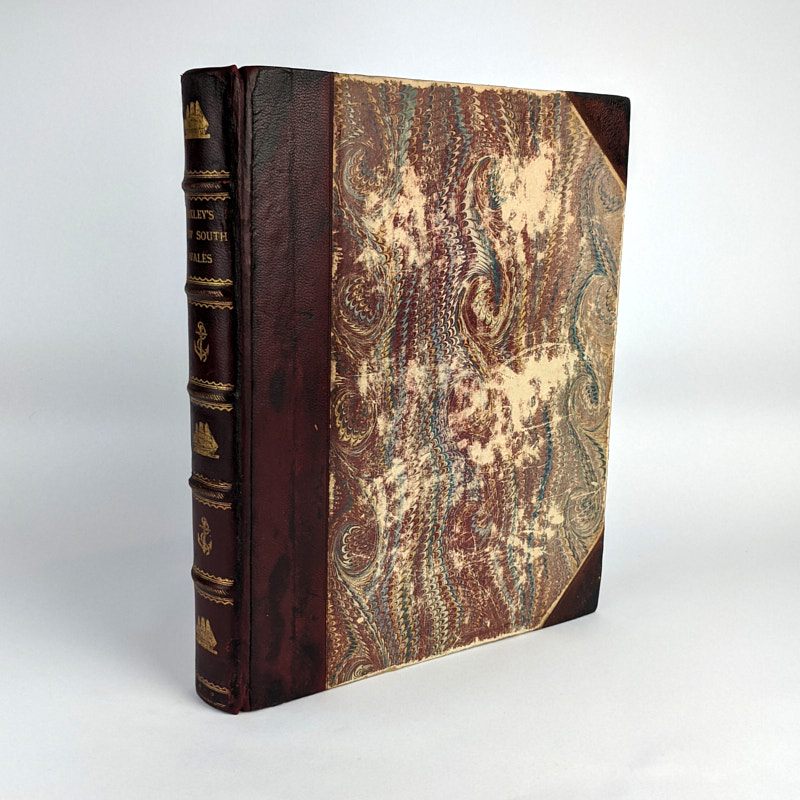 Journals of Two Expeditions into the Interior of New South Wales, Undertaken by Order of the British Government in the Years 1817-18


: , .
First Edition.
27cm x 22.5cm. Quarto. xvi, 408 pages, 3 folding maps/charts, 1 folding engraved plate, 5 aquatints (2 hand-coloured), 2 folding tables. Half leather, 5 raised bands, gilt lettering, and decoration, date panel, marbled papered boards, marbled endpapers.
Oxley’s account of his explorations of the Lachlan and Macquarie Rivers: “the foundation work in the field of Australian inland exploration and the first detailed description of the interior of New South Wales.” (Jonathan Wantrup, Australian Rare Books, 1788-1900) FERGUSON 796, WANTRUP 107.
Bookplate of Robert Rowlands to front flyleaf. Stamp of Cowra High School Library to title page, no other library markings. Recently rebacked with an earlier spineback relaid. Marbled papered boards shelf worn and the board edges with some rubbing. The maps are foxed, moreso the first two, and those with minor stains and repaired along one fold, one with paper, the other with linen, one other minor paper repair to fore-edge of page 217/8. Minor foxing to the folding engraved plate, Field Plains from Mount Amyot, and the first table. The second table slightly misfolded and with a paper repair at the hinge tail. Minor marks to the hand coloured The Grave of a Native of Australia plate with a finger smudge to the top margin and a small white dot in the top right portion of the image. Arbuthnot’s Range from the West has two stain to the left edge and the opposite page is tanned. The Liverpool Plains and Bathurst’s Falls plates are foxed, Bathurst’s Falls also with two small white marks to the right side of the image. The hand coloured plate, A Native Chief of Bathurst is in Very Good Condition as is the majority of the text with only the occasional minor mark or sign of handling. Good Condition.