“There is a growing dissatisfaction among many anarchists with the tactics and organization of the protests since Seattle. Many militant anarchists/anti-capitalists feel that the black-bloc form has “run its course” or at least needs to be supplemented by a new homegrown form of radical anarchist activism. Over the past year and a half, there have been many critiques both from within and outside the anarchist community about black bloc tactics and organization. Thus this pamphlet will not rehash old territory, but suggest an alternative (not a substitute) for contemporary anarchist tactics by expanding the idea of “Radical Defense”. This new approach, called Mutiny, borrows many ideas from recent U.S. black blocs as well as other radical direct action groups (such as Ya Basta! ) while adding new methods of organizing and new short-term golas. In the end, Pirates, by using the articles and ideas of Mutiny, seek the same goal, as shared by most anarchists: a stateless community. end is the same, but the means, and organizing principles, are quite different.” (from inside cover) 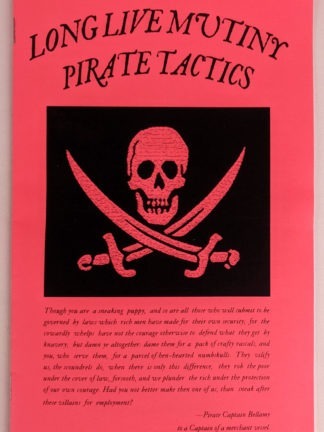