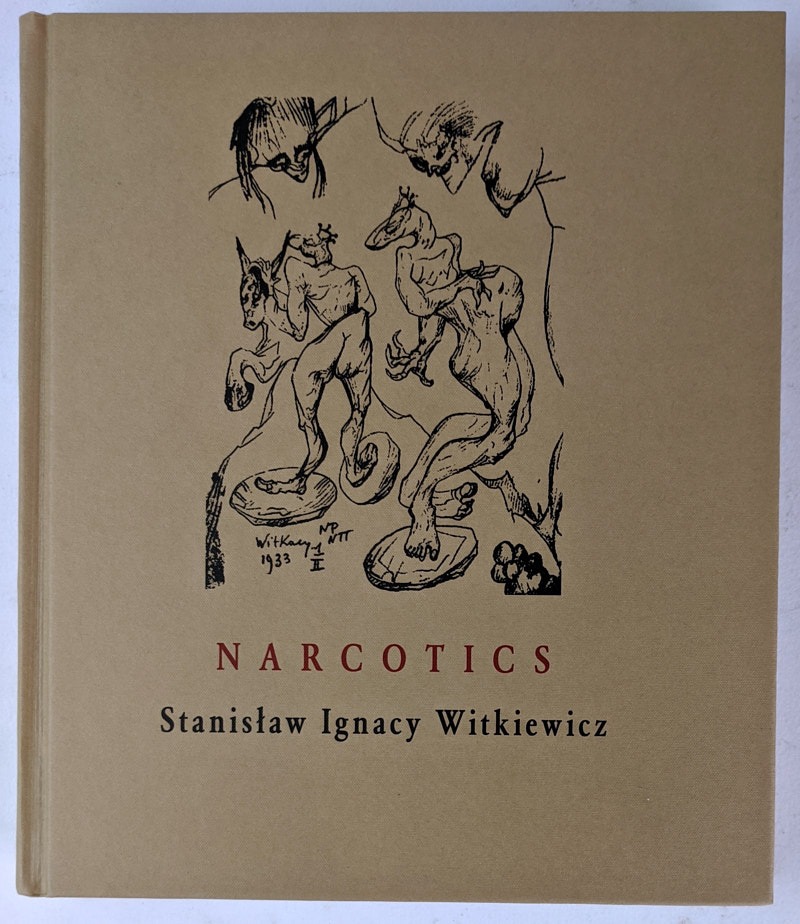 
: , .
First Edition.
20cm x 17cm. 168 pages, colour illustrations. Illustrated papered boards.
“In the vein of the well-known drug writings of De Quincey and Baudelaire from a century earlier and those of his contemporaries Walter Benjamin and Jean Cocteau–and foreshadowing the later writings of Aldous Huxley and Carlos Castaneda on psychoactive drugs–Witkacy composed Narcotics in 1930 to discuss and document not only his own experimentation with different substances but the nature of addiction itself and the prevailing social attitude toward drugs, particularly those that were considered “acceptable.” As life became increasingly mechanized, Witkacy felt that a sense of the metaphysical could only be achieved by artificial means, and like Henri Michaux, he produced an extensive oeuvre of singular visual art while under the influence of a variety of substances. Meandering, acerbic, and burlesque, rife with neologisms and expressions from German, French, English, and Russian, Witkacy dissects Polish society and the art world as well as himself via the hypocrisy surrounding drug use. Since it was first published in the 1930s, Narcotics has achieved a cult status in Poland where it is considered both a modernist classic and a paragon of Witkiewiczian madness. This edition, the first complete translation in English, includes a second appendix written later, passages from the novel Farewell to Autumn, and 34 color reproductions of a cross section of portraits to show how various substances impacted Witkacy’s art.” (publisher’s blurb)
. New Book.