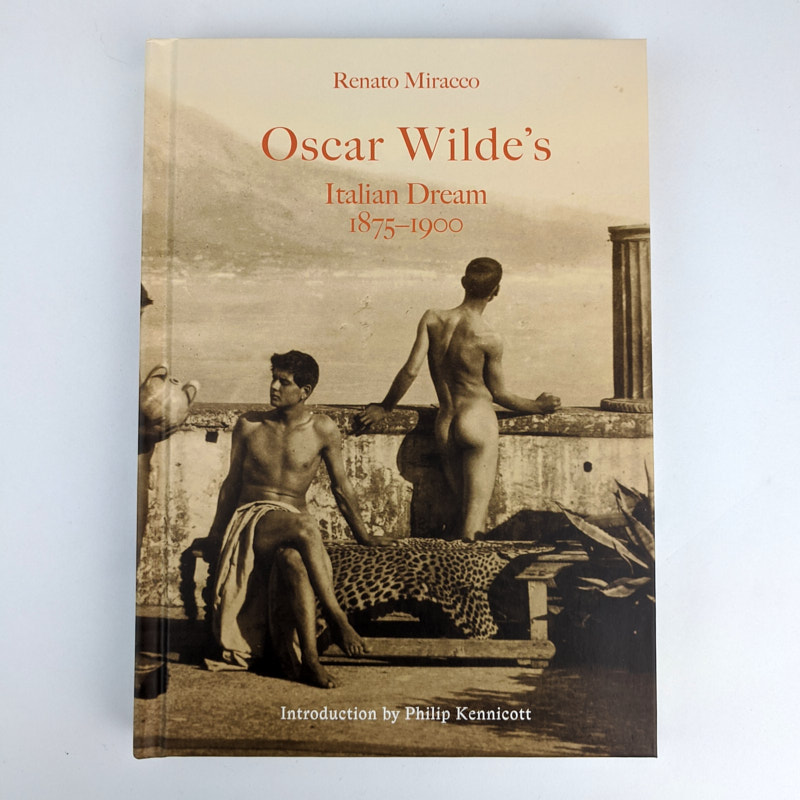 
: , .
First Edition.
25cm x 18cm. 160 pages, duotone illustrations. Pictorial matte papered boards.
The Infamous St. Oscar of Oxford, Poet and Martyr. Undecided between the Cloister and the Cafe. “In Oscar Wilde’s Italian Dream 1875-1900, leading Wilde author Renato Miracco has combined written research with visual iconographic material – from Wilde’s earliest heady trips to Italy as an Oxford student to his final days in France and Italy in 1900 after his incarceration in Reading Gaol, and his voluntary exile from Great Britain. Italy, and the larger world outside of London, was essential to the sensitivity and awareness of Wilde’s identity, to his contributions to the prison reform, to his challenges to the social norms and sexual stereotypes in his last years. Latin formed the basis of a proper English gentleman’s education-and Italy presented a landscape which animated and exacerbated social and personal conflict for young men such as Wilde. It also offered a great deal of sexual liberty compared to the oppressive moral atmosphere of England at that time. The images Miracco has incorporated in this volume (including photos that Wilde received from the gay German photographer, Von Gloeden) are mainly unknown from private collections, and together with letters, reminiscences, magazine and newspaper articles (along with derogatory articles about Wilde written by the Italian press) play a key role in placing Wilde-s character, and an entire generation, in a complex context – not only literary, but also visual. Reading about Naples, Rome, Palermo, Sicily, and Capri of that time, you see it as it must have appeared in the eyes of the writer. Oscar Wilde’s Italian Dream 1875-1900 is a major addition to the canon of one of the world’s greatest literary figures.” (publisher’s blurb)
. New Book.