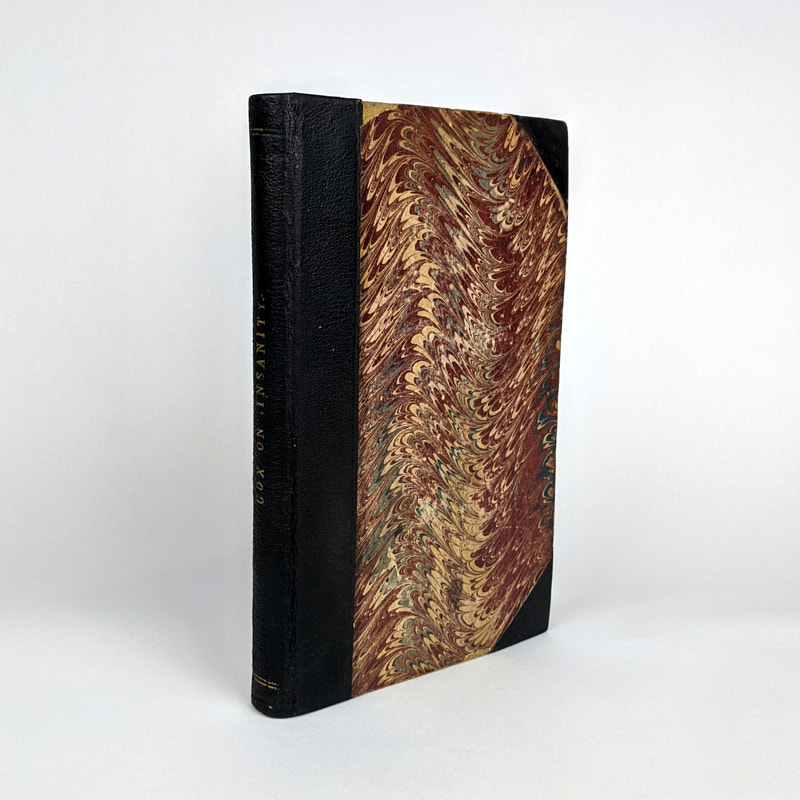 
: , .
Third Edition.
21cm x 14cm. xvi, 215 pages. Half leather, marbled papered boards, gilt lettering
“In which some Suggestions are offered towards an improved Mode of treating Diseases of the Mind, and Some Rules proposed which it is hoped may lead to a more Humane and successful Method of Cure: to which are subjoined, Remarks on Medical Jurisprudence, as it relates to Diseased Intellect.” The third and final revised edition of the major work by English physician Joseph Mason Cox (1763-1818). Cox was one of the first medical graduates to specialise in treatment of the insane. Throughout his career he advocated for more humane treatment of lunatics and maniacs. In this work he introduces his swinging technique, based on a design by Erasmus Darwin, of spinning a patient’s body round a vertical axis in a specially designed chair which would produce nausea, vomiting, and convulsions, but would ultimately lead to a restful slumber, which he believed to be a positive outcome for the maniacal.
Recently recased with new endpapers. Moderate rubbing to leather. Bookseller label of The Western Medical Book Stores, Cavendish Sq. Minor to very minor foxing. Minor pencil annotations throughout, in the form of ticks to the margin. A couple of inkstains in places and an ink number to the title page. Good Condition.