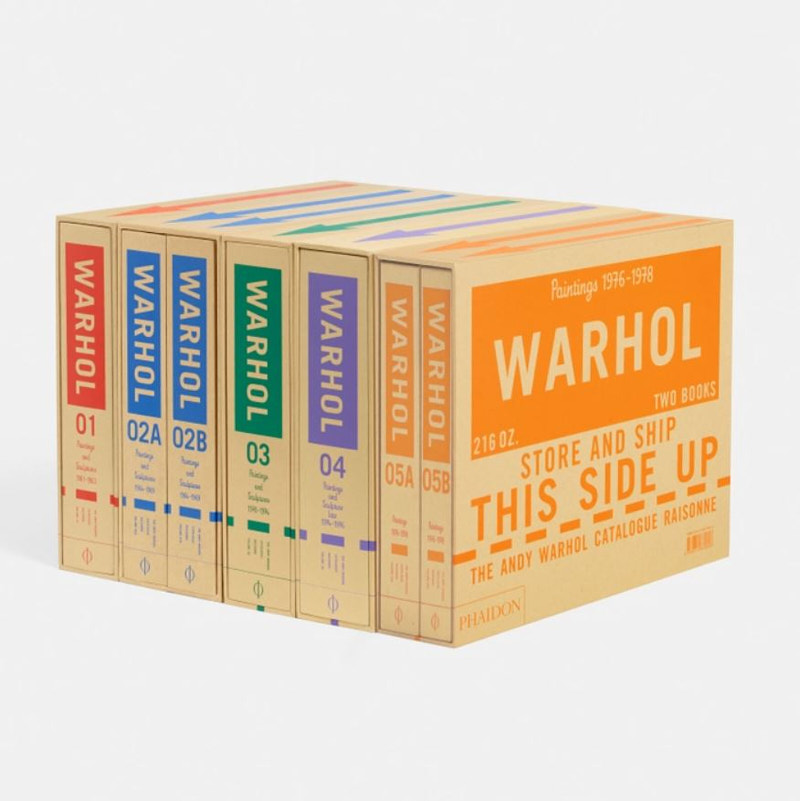 
: , .
.
27cm x 30.5cm. 3400 pages, 6200 illustrations. Lettered papered boards, slipcases.
The first 5 volumes (all published to date), with volumes 2 and 5 in two parts each (7 volumes total) of The Andy Warhol Catalogue Raisonne. “Andy Warhol (1928-1987) is one of the most iconic figures of twentieth-century art, a highly enigmatic personality who not only altered the definition of art but also left in his wake a vast and staggeringly complex record of his studio life and daily activities. The Andy Warhol Catalogue Raisonne, the definitive record of the artist’s paintings, sculptures and drawings, will document over 15,000 works produced by Warhol between 1948 and 1987. Also included is an incredible array of rarely published source material, including newspaper scraps and movie star publicity stills that inspired Warhol’s boundlessly fascinating life and career. The Andy Warhol Catalogue Raisonne, initiated in 1977 by Thomas Ammann, has been sponsored by the Andy Warhol Foundation for the Visual Arts since 1993. The original advisors to the project were the distinguished curators and art historians Kynaston McShine and Robert Rosenblum. The Editors and the Catalogue Raisonne team have examined the vast majority of Warhol’s works first-hand and conducted a thorough review of his massive archive, which at his death consisted of some 1,500 boxes, including the Time Capsules. Volume 1 includes classic and much-prized Warhol works, produced between 1961-63, such as the Campbell Soup Can paintings, images of the iconic figures of Marilyn, Liz and Elvis, the Death and Disaster series and early self-portraits. Volume 2 documents the artist’s paintings, sculpture and installations made between 1964-69, the important period known as ‘The Factory Years’, when Warhol began to acquire Pop Art fame as well as a cadre of collaborators and fans – all of which made ‘The Factory’ into one of the most mythologized artist’s studios ever, and made Warhol’s work at this time emblematic of his career as a whole. Volume 3: The sculpture and paintings of 1970-74 are the subject of this third volume of the Andy Warhol Catalogue Raisonne, which includes Warhols nearly 200 portraits from the Mao series. Volume 4: The 607 paintings and one sculpture documented in Volume 4 of the Andy Warhol Catalogue Raisonne were produced during a period of less than three years, from late 1974 through early 1977. It features Warhols portraits of transgender models, the Ladies and Gentlemen paintings, Warhols largest series of the 1970s. Volume 5: This two-book addition to The Andy Warhol Catalogue Raisonne persuasively demonstrates the subversive core of Warhol’s art. Intent on radical departure from his portraiture in the early seventies, Warhol’s production gradually became anything but ‘just faces’. From portraits of athletes and self-portraits to his Skull and Hammer and Sickle series, the Torso and Sex Parts paintings, and his abstract Piss, Oxidation, and Cum canvases, volume 5 showcases Warhol’s work as powerful, and provocative as ever.” (publisher’s blurb)
Factory sealed. Volume 5 in the original publisher’s shipping box. Fine Condition.