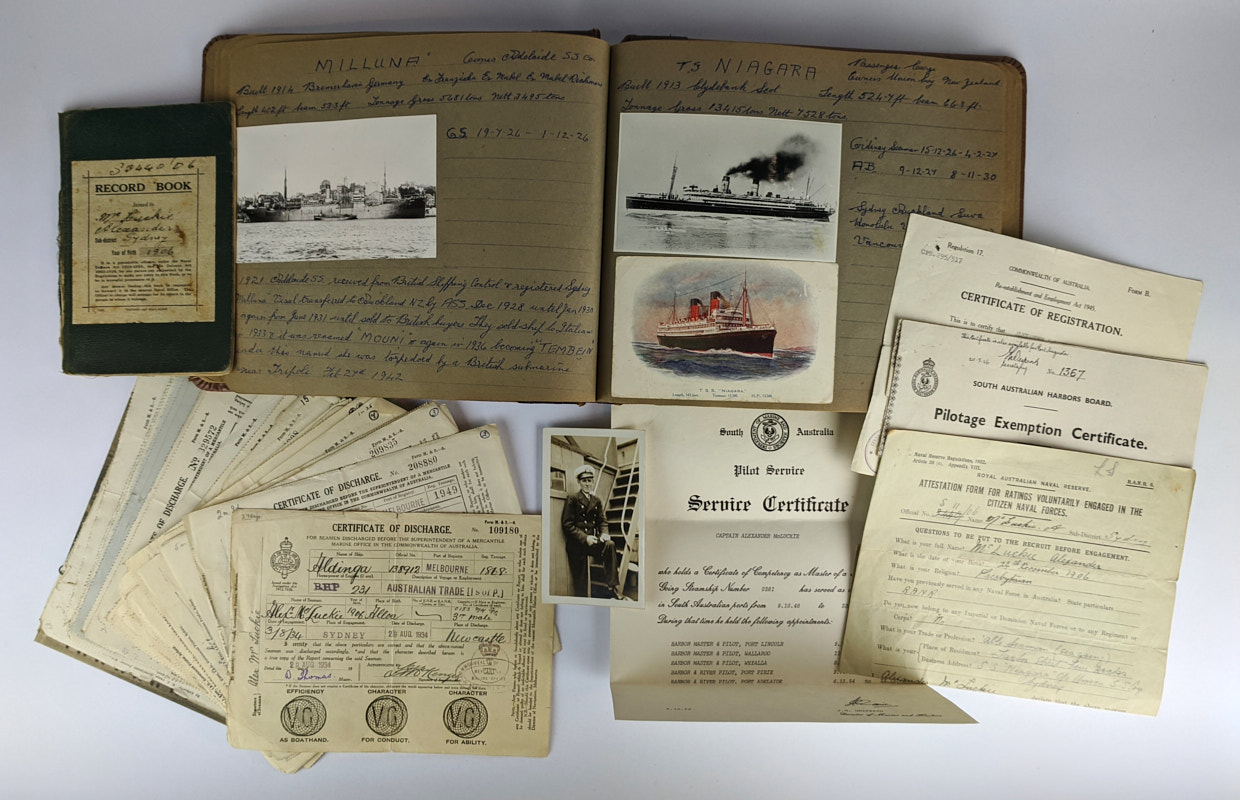 The Career of Captain Alexander McLuckie


: , .
Original Documents.
29.5cm x 23.5cm. 1 photo album with [42] pages of photographs and manuscript description, 20 page record book, 1 portrait photograph, 54 certificates of discharge, 1 newspaper clipping, 5 various certificates and registrations.
A photo album documenting the career of Captain Alexander McLuckie containing photographs, postcards, clippings, and handwritten descriptions of each ship he served upon from when he first signed on as Boy to the Hampshire in Scotland in the 1920s. After his second posting he paid for his passage to Australia and there served numerous ships from Sydney and Adelaide travelling to ports all over Australia. Descriptions vary in detail from ship to ship but often include information on the ship’s construction and wrecking, sometimes together with details of the work the ship did, both in general, and specifically while he served aboard. The log of ships he worked on ends in the late 1940s, though he continues to record details of various ships from his position as customs officer, harbor master, and pilot at Wallaroo, Port Lincoln, Port Pirie, and Port Adelaide from 1948 through to 1971. From the 1970s through to 1981 he records several journeys aboard cruise ships. The photo album is accompanied by 54 certificates of discharge further documenting his service from 1934 to 1976, together with a Pilot Service Certificate from the South Australia Department of Marine and Harbors, a Pilotage Exemption Certificate, a Commonwealth of Australia Naval Record Book logging his service as a Volunteer in the Royal Australian Navy from 1925 to 1927, together with an Attestation Form for Ratings Voluntarily Engaged in the Citizen Naval Forces, and a snapshot portrait of McLuckie in uniform, at the foot of a gangway.
The album is Near Fine Condition with only minor handling wear, some of the photographs and clippings are rubbed and worn. The certificates have been folded but are in Very Good Condition. The Log Book is fragile with the spine splitting though the interior is clean. Very Good Condition.