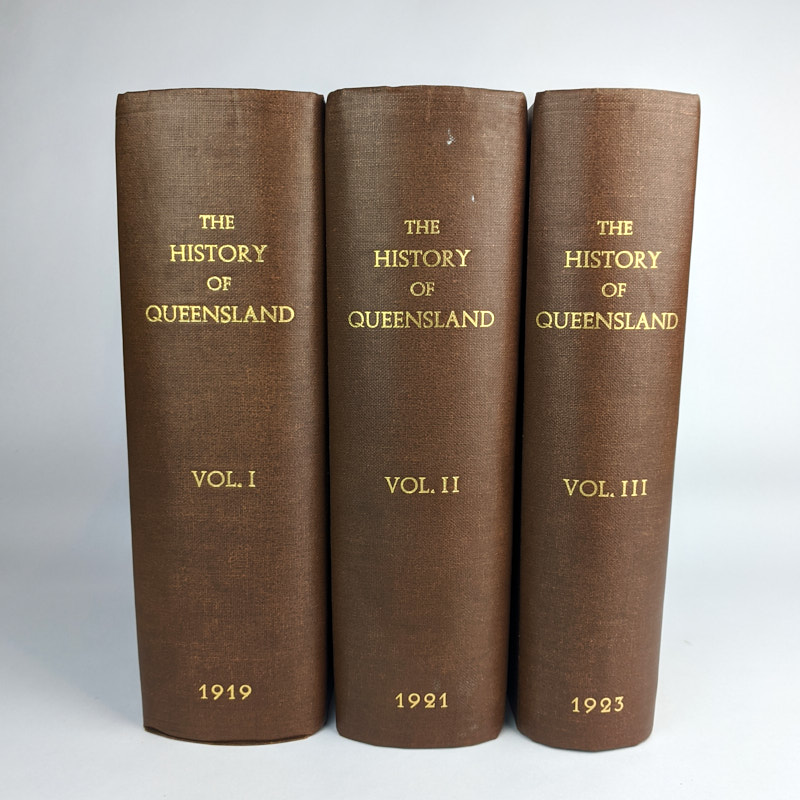 The History of Queensland: Its People and Industries (3 Volumes)


: , .
First Edition.
28cm x 21cm. xvi, 978, [xii], 940, [xii], 872 pages, 3 volumes, black and white illustrations. Brown cloth, gilt lettering.
A full set of the monumental Fox’s History of Queensland: An Historical and Commercial Review, Descriptive and Biographical Facts, Figures and Illustrations: An Epitome of Progress. Published in 3 volumes in 1919, 1921, and 1923, it is the largest historical work on Queensland and its colonial settler families ever produced. Despite known colloquially as Fox’s History of Queensland, and with the second and third volumes crediting him as the compiler, the first volume was edited by Phillip Champion de Crespigny and Ernest Sando Emerson, the second by Andrew Grant, and the third by G. G. Swann, together with countless unnamed writers and with contributions from various photographers. Rare as a complete set and with the original leather almost always worn and cracked, this set well preserved having being rebound in full brown cloth many years ago.
Minor cracking at the head of the upper hinge of volume 1, still firm. Minor handling wear, with only occasional minor fore-edge chips or tears. Foxing to edges of volume 2, minor to very minor elsewhere. Bookseller labels of Berkelouw Bookdealers Sydney. Very Good Condition.