The Sixth Sir William Dobell Memorial Lecture: “The Post-War Years in Australian Art. Some lessons for the future.”

Sir William Dobell, or “Bill,” as he preferred to be called, was a renowned Australian portrait and landscape artist, and many great thinkers and artists have been invited to present the Memorial Lecture founded in his honour. In its sixth iteration, in 1981, it was given by Emeritus Professor Sir Joseph Burke, one of Australia’s most significant art historians and a remarkably gifted orator, who had just the year before been made a Knight Commander of the Order of the British Empire (KBE). In this short but insightful text, Burke addresses himself to propaganda, media and the roles of the museum and politics in the art of the day, providing entertaining, educational and spirited thinking as relevant today as it was then.

Light soiling/marks/foxing to top outside edge, very light to other edges, endpapers, and occasionally throughout. Very Good Condition. 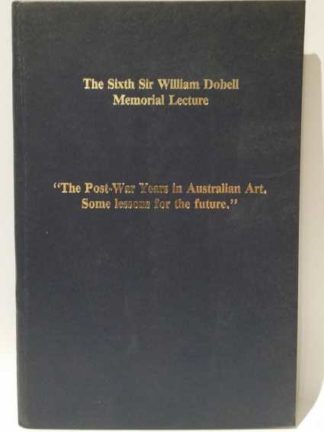 You're viewing: The Sixth Sir William Dobell Memorial Lecture: “The Post-War Years in Australian Art. Some lessons for the future.” $60.00 AUD
Add to cart