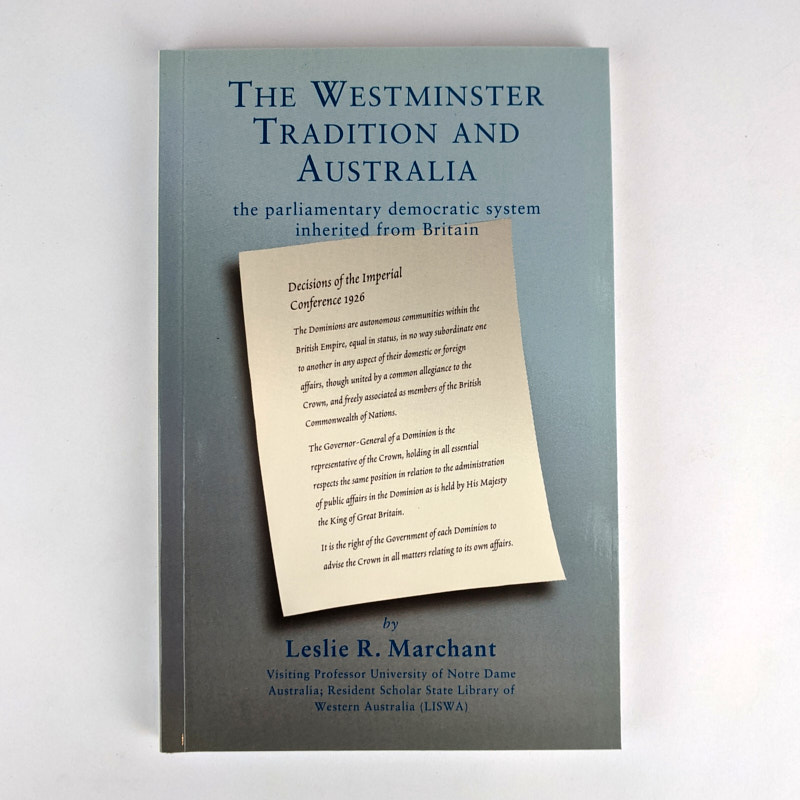 The Westminster Tradition and Australia: The Parliamentary Democratic System Inherited From Britain


: , .
First Edition.
21.5cm x 14cm. xiv, 161 pages. Lettered wrappers.
“This book is essential reading for all Australians who now regularly face proposals for constitutional change, and is useful for those who live in other British dominions. For it provides a ready guide to the “Westminster System of Government” which grew over centuries, unplanned like Topsy, which Britain uses and the dominions inherited. The book is presented like a course that one can attend throughout, or walk into and out of as time suits. Each chapter therefore stands by itself. This means that some information is duplicated. This was deliberately done for the convenience of readers who will not have to break off their reading to look up parts of other chapters to get information about the chapter they are reading. Like many modern courses, the book commences of necessity with a section undoing incorrect learning, bad teaching based on opinion instead of research, and misleading political propaganda. This widely researched book provides a handy reference for young and old Australians, migrants and intended migrants to learn about the Westminster System Australia inherited, but is now generally not taught. It was written primarily in the belief that if Australians and others are forced to vote for constitutional change, it is best to know exactly what is being changed. After correcting misinformation, the book goes on to describes the essential features of the Westminster System including the English Anglo Saxon system of Kingship which in fact is elective. England has Heirs Apparent, not Crown Princes. Of the 60 monarchs who have ruled since Egbert the Great united England, only some 24 obvious Heirs Apparent have succeeded. Of the others, some certainties, like Hamlet, were not elected. Others have been dismissed or forced to abdicate. One King was beheaded by Parliament. Other topics such as the balance between the executive and legislative branches of government, and the independent judiciary are dealt with together with the problem of how to bring to book ministers and officials who act unethically and unlawfully. The book includes points for further thought and discussions primarily to serve the view that it might be better to identify weaknesses in the system and correct these instead of leaping into the unknown. For the Westminster System does not favour written constitutions. They belong to “instant democracies”.” (publisher’s blurb)
. New Book.