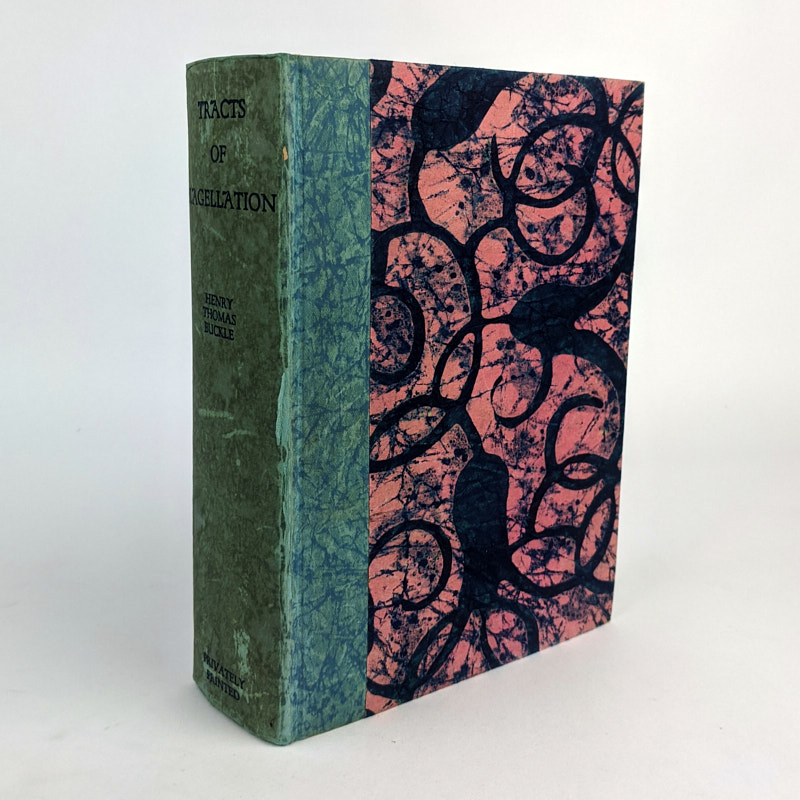 Tracts of Flagellation [The Library Illustrative of Social Progress]


: , .
Reprint.
20cm x 15cm. 79, 87, 82, 95, 95, 88, 96 pages, 1 volume. Decorative papered boards, rough edges, slipcase.
An early 20th century “private printing” of The Library Illustrative of Social Progress, being 7 reprints of eighteenth-century pornographic works on flagellation published by John Camden Hotten in the mid to late 19th century. This edition matches the text of J. C. Hotten’s reprints, with any reference to plates removed, and with the incorrect attribution that the works come from the library of Henry Thomas Buckle (as disputed by Henry Spencer Ashbee who states the volumes as being from the library of a well known London book collector from which Hotten borrowed the volumes and without the owner’s knowledge or permission had them reprinted (Index Librorum Prohibitorum, PISANUS FRAXI)). This edition however printed using different plates and bound in a decorative binding in a different order to the appearance of Hotten, likely reproduced in America in the early 20th century from Hotten’s unsold copies which were disposed of in 1873, to Mr. J. W. Bouton, of New York. A limitation statement of 500 copies of which this is numbered 150 likely more mere “private printing” allure. Printing history aside, an attractive diverse, and scarce set of works on flogging, beating, spanking, bums, rods, birch, and all things flagellatory. Full list of titles: 1. Sublime of Flagellation; 2. A Treatise of the Use of Flogging in Venereal Affairs; 3. Madame Birchini’s Dance; 4. Fashionable Lectures; 5. Lady Bumtickler’s Revels; 6. Exhibition of Female Flagellants in the Modest and Incontinent World; 7. Part the Second of the Exhibition of Female Flagellants.
Minor to moderate rubbing to spine. Interior clean. Slipcase in Good Condition with some chipping to the paper covering and some tearing to the edges. Very Good Condition.