Will Roosevelt Succeed?: A Study of Fascist Tendencies in America

In the early 1930s, A. Fenner Brockway boarded a trans-Atlantic ship to the United States, determined to make sense of Roosevelt’s rejection of rugged individualism in the policies of the New Deal. Nationalism, dictatorship and economic control were melding into a rigid fascism across Europe and Asia, and Brockway wanted to understand America’s new alternative to competitive capitalism. In this readable, insightful work, written in a time of global turmoil and heightening tensions, Brockway paints a portrait of an unprecedented national struggle for freedom and fairness, and lays foundations for understand fascism then and now. 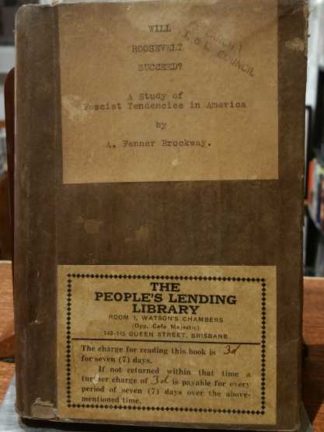 You're viewing: Will Roosevelt Succeed?: A Study of Fascist Tendencies in America $200.00 AUD
Add to cart